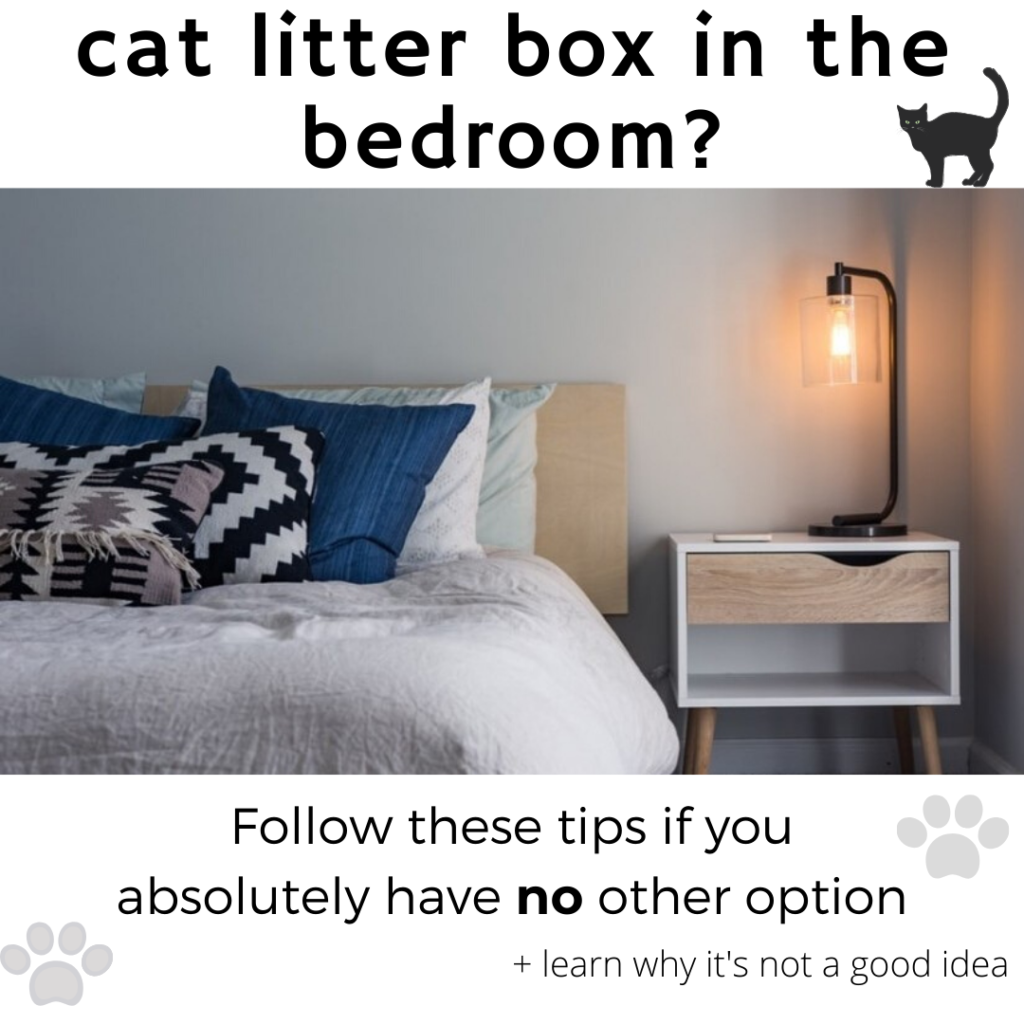 So, can you keep a cat litter box in your bedroom? You might want to think twice about it, and it’s not just about the smell! I would only suggest doing this if you have no other options.

Of course, there are many reasons why you might need to put a litter box in a bedroom. Maybe you’re renting a room or small space, and the house owner doesn’t want the cat box anywhere else in the house. Or maybe there are other cats you need to keep separate from each other. Whatever the case, it’s understandable.

Sure, the smell might be the first reason why someone would opt out of placing their cat’s litter box in the bedroom, but there are other reasons behind why you might want to look for an alternative placement.

Ammonia builds up in a cat litter box when it becomes dirty and filled with urine and poop. This could potentially lead to over-exposure and can cause mild symptoms in humans like headaches and nausea. However, keeping the litter box consistently cleaned can prevent this.

The litter box contains feces, which are carriers of diseases.

Initially, I heard “cat scratch fever” is a common disease that could be transmitted to humans via a dirty litter box. However, a bit more research led me to believe that was probably extremely unlikely. According to vet.cornell.edu, cat scratch fever is transmitted from cat bites and scratches, not feces. Even then, it’s not common.

cryptosporidiosis (protozoal) can cause diarrhea, vomiting, fever, abdominal cramps, and dehydration in both cats and people.

giardiasis (protozoal) diarrhea, flatulence, abdominal cramps, nausea, and dehydration (this is not usually transmitted from cats to humans either)

toxoplasmosis (protozoal) this does not usually cause symptoms but can make those with underdeveloped immune systems, or immunocompromised individuals, very sick. This is why pregnant women are told to avoid scooping litter boxes because of the potential risk to the fetus.

I will note that none of these infections are common in healthy adults. Typically they infect the very young or the very old. If you’re considering putting the kitty box in a room with an infant or young child, or an older person, I absolutely would not.

But it’s still not a good idea for anyone to sleep around a litter box because you probably don’t want to put yourself around potential disease-causing parasites/bacteria for sustained periods of time.

Obviously keeping it clean will greatly reduce the chances of anything spreading this way.

If your cat is a litter box scratcher, this could just be annoying. One of my cats loves to scratch the side of his litter box and dig and dig FOREVER. I’m not sure why he does this, but I can hear it all the way across the house.

Like you, cats appreciate privacy when doing their business. I can tell I make my cats feel uncomfortable when I walk by their litter boxes and they’re trying to go potty.

If you’re putting the box in a very small room, they might get anxious if you’re always around them or they can never get any privacy to use the box.

If you absolutely don’t have a choice, here are some tips for keeping a kitty litter box in your bedroom:

Keep the box clean: If you must sleep near the litter box, it’s even more important to keep it cleaned regularly. You could even invest in a self-scooping litter box (automatic) so you wouldn’t have to worry about it so much. That way, even if your cat poops while you’re sleeping it’ll scoop away the poop pretty quickly.

Keep it covered (if possible): If your cat will go in a covered litter box, try an enclosed box to prevent a lot of the cat litter from flying through the air. This can help prevent exposure to ammonia and diseases caused by cat excrement.

Designate a space/keep it hidden: If you have a more private space in your room, keep it in a closet, or corner as far away from where you sleep as possible. You could also consider investing in some type of litter box furniture, which will completely disguise your cat’s litter box and is a great way to keep it covered. This will help give your cat privacy as well as keep the litter away from you while you’re sleeping.

Sleeping near your kitty’s box is not really a good idea, but if you must make sure you take proper precautions to help eliminate your exposure to the litter and waste as much as possible.